The Huffington Post  | By Lydia O’Connor
University of California students participated in a statewide campus walkout Monday as part of their ongoing protests against a significant tuition hike.

The movement is anchored at UC Berkeley, where hundreds of students have occupied the campus’s Wheeler Hall since a committee of the UC Board of Regents voted Wednesday to raise tuition 5 percent per year for five years, bumping next year’s in-state student base costs from $12,192 to $12,804 and ultimately to $15,564 in 2019 — not including additional fees, books, and room and board. 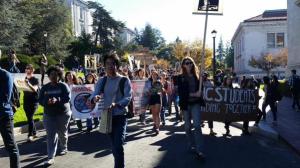 As the walkout progressed at UC Berkeley, students at other campuses, including UC San Diego and UC Irvine, began occupations of their own, according to tweets shared by students.

The cost hike is contingent on state funding increases, a caveat that vocal opponent Gov. Jerry Brown (D) has said is tantamount to taking hostages.

“Essentially it’s a debate between Governor Brown and UC president Janet Napolitanoover how the UC is going to be funded, and students are really pushing back against it,” Karasek told The Huffington Post. “We’re not going to be the bargaining chip.” 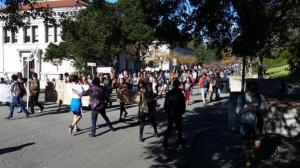