What is All Saint’s Day, Kuya Alex?

Today is All Saint’s Day, also known as All Hallows, Solemnity of All Saints, or Feast of All Saints is a solemnity celebrated on 1 November by the Catholic Church and various Protestant denominations, and on the first Sunday after Pentecost in Eastern Catholicism and Eastern Orthodoxy, in honour of all the saints, known and unknown. The liturgical celebration begins at Vespers on the evening of 31 October and ends at the close of 1 November. It is thus the day before All Souls’ Day.

Hallowmas is another term for the feast, and was used by Shakespeare in this sense. However, a few recent writers have applied this term to the three days from 31 October to 2 November inclusive, as a synonym for the triduum of Hallowtide.

Hallowmas in the Philippines is variously called “Undás“, “Todos los Santos” (Spanish, “All Saints”), and sometimes “Araw ng mga Patáy” (Tagalog, “Day of the Dead”), which actually refers to the following day of All Souls’ Day but includes it. Filipinos traditionally observe this day by visiting the family dead to clean and repair their tombs. Offerings of prayers, flowers, candles, and even food are made, while Chinese Filipinos additionally burn incense and kim. Many also spend the day and ensuing night holding reunions at the graves, playing games and music, singing karaoke, and feasting. 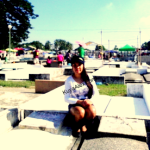 Grace and I woke up very early at 6am to get ready for the day. We prepared what we needed to bring such as the candles, snacks, food, and water. We left the house at 8am and head to the Urbiztondo cemetery to visit the tombs of her relatives. Due to the congestion of crowds of people at the cemetery, it was heavy enforced by armed guards. I am sure I do not want to piss them off, but I attempted to avoid the crowd and enter through the side anyway. One of the guards ordered me to stop and told us we can’t enter using our scooter. He was nice enough to point to a nice location where we can park our scooter near the guard post and offered to watch it for us. So we began to trek about a quarter a mile inward towards the cemetery. Upon 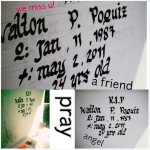 reaching the tombs of Grace’s relatives, we lit the candles that we bought a day prior and open a few snacks and drinks as offerings. Prayers were said and there was an awkward silence. I am personally not a catholic or christian, but I am open to all religions. I respect the culture and I was glad to be part of it. While Grace does her prayers, I decided to call home to see how everyone is doing in California. After about 4 hours sitting under a umbrella under the beating hot sun, we walk across the cemetery to the older section to visit one of Grace’s long time friend. I learned his name was Walton, about 24 years of age during his passing. His family was already there when we came by. It was a great moment to see each other after a year. 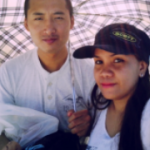 The last time we saw the family was last year, however, this year, another family member is laid to rest. You see, in the Philippines, if another person dies in the family, that person is laid to rest on top of the tomb of the other family that is already buried or next to the relative. We stayed with the family and talked for about an hour. Before leaving the cemetery, we proceed to a nearby church to pray for the souls of dead and saints.

We left the cemetery at about 2 pm and decided to visit one of Grace’s long time friend that she haven’t seen for 10 years. Her name is Sheryl. They finally reconnected via Facebook 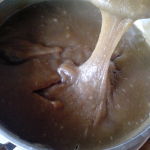 after losing contact after high school. I learned that it is also tradition for Filipinos to come home on All Saints Day since it is a holiday. Failing to come is a dishonor to the family. Anyway, we stayed for about an hour since Sheryl will go visit the cemetery. She treated us to some home made Halo Halo while we were there. On our way to city proper, we decided to have a surprise visit at another friend’s home who recently give birth to a baby boy. Her name is Jestrl. Her mother made us something that I never seen before. It is a bean paste dessert and is very sweet and sticky, yet very tasty. We stayed with Kirvylyn and her baby for about 3 hours since the girls have so much to talk about. I kept myself busy with the tv and the internet on my phone. After the visit, we proceed to the city proper. We decided to grab dinner in San Carlos City at a canteen that we frequent all the time.

Concert at the Cemetery? whaa 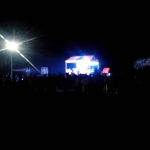 It is about 6pm and the sky is slowly dimming. We went to visit another cemetery where some of Grace’s distant relatives are at on our way home. It is called Holy Garden. This cemetery was very packed of people. We spent about 15 minutes stuck in traffic and about 5 minutes finding parking. There are many families partying and having a great time. Family gatherings on top of the tomb of their love ones is the norm here in the Philippines. Candles were lit and flowers were nicely decorated. On top of that, there was a concert going on in the back part of the cemetery 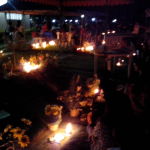 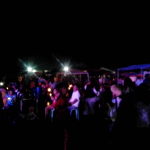 Its More Fun in the Philippines!